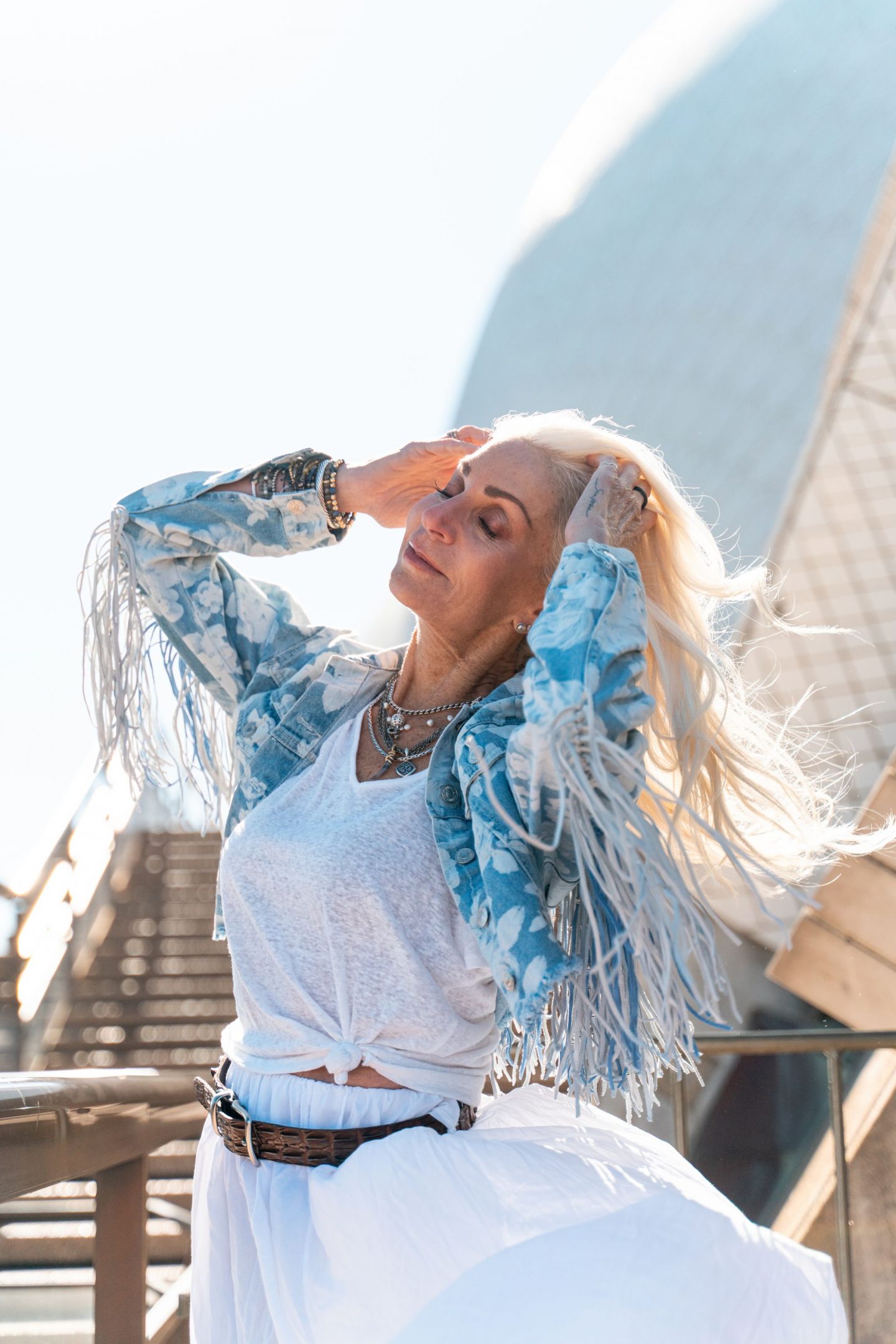 Melbourne, my first stop on my journey into Australia!

What an amazing, completely multicultural experience! I felt at home in this beautiful city. I was lucky enough to stay in the most amazing location! What I found the most fascinating about Melbourne was the art! It’s truly everywhere. The fashion in Australia was so eclectic as well – so I fit right in. I loved wearing the things I made, which made great conversation starters!

Melbourne is truly centered around coffee. There is a quaint coffee cafe on every corner, in the train station there is a coffee shop that is completely based on the honor system! You grab a to go cup, drop in your payment and be on your way. The shop was thriving! I also loved the city layout and how easy it was to get around because transportation is free within the city.

I went to a super fun open air market and enjoyed all the food and hand crafted items. I had a custom made crocodile 🐊 belt made. I wanted to make sure the skin was from a croc who passed away, not was hunted, and I found the perfect place. He donates part of his profits to crocodile protection. I also had the best experience visiting kangaroo 🦘 wallaby’s, emus and koalas 🐨 in their natural beauty and habitat. The guided tour I did was part of the Clancy Foundation which protects wildlife especially kolas!

What an amazing spiritual experience Uluru is. Besides this area being sacred to the Aborigines people they have been so kind to open up areas for the public to explore and get a feel of what their past was like. The feeling you get in Ayers Rock is complete serenity, natural beauty unlike anything I’ve seen. While visiting, I hiked the base of Ayers Rock, 8 miles and learned about the scars in the rocks and what they represent. I also experienced dinner under a stunning star filled sky with silence that I also found amazingly comforting.

I also rode a camel! One thing no one could explain was the flies, there were literally millions of them, as soon as it got warm your fly cover was essential! Kata Tjuta was next, incredible rock formations that form whispering wind gorges. Next was on to Cairns, the Daintree rainforest and Cape Tribulation. The Great Barrier Reef was beautiful, even though some bleaching has occurred, the Reef was alive and incredibly beautiful. I dove with the turtles and fish and spent a lot of time snorkeling. The highlight of my dive was getting to pet a huge parrot fish. The Daintree rainforest was pretty amazing, seeing crocodiles in their natural habitat was awesome! 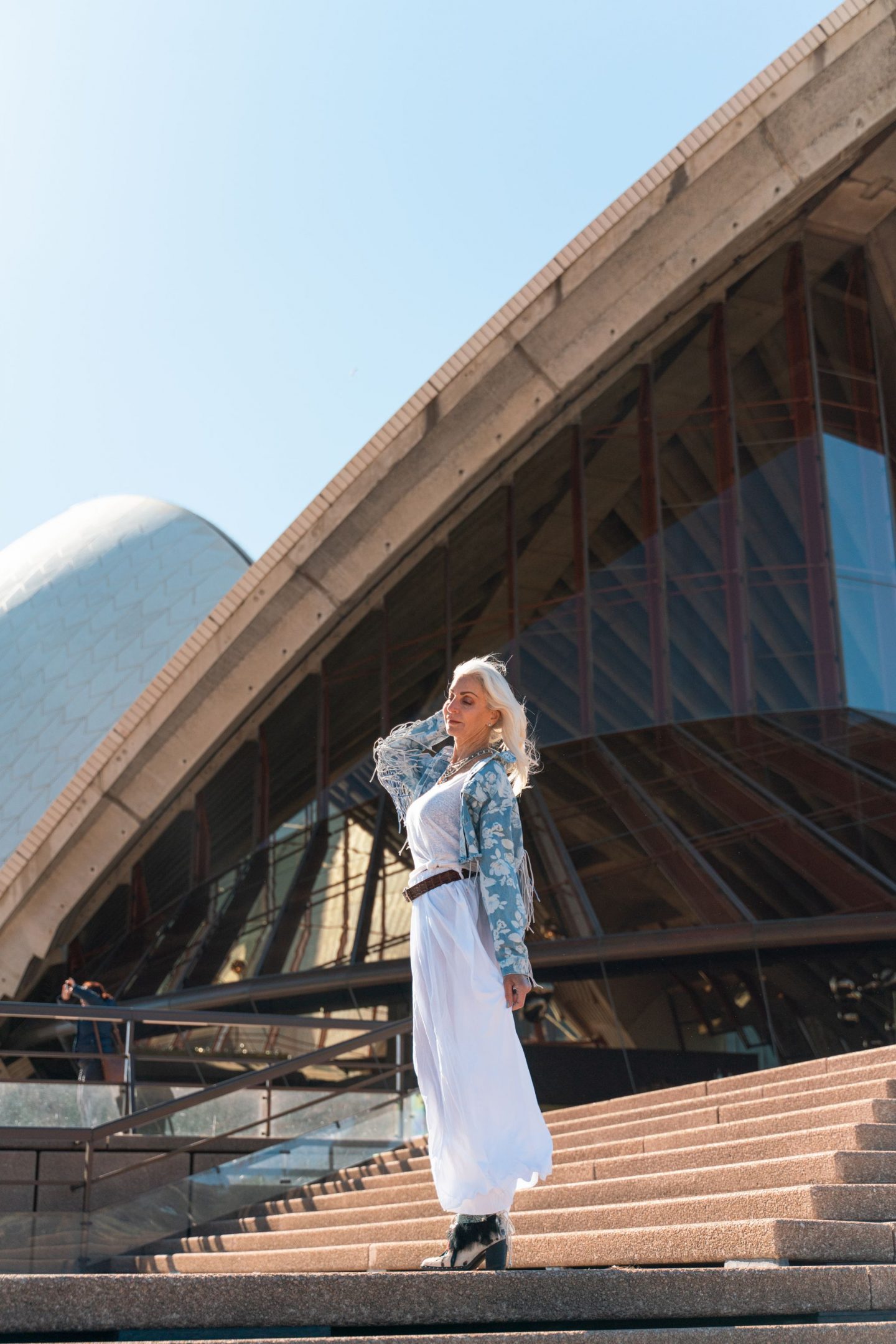 Arriving in Sydney was spectacular! What a beautiful city. I literally got off the plane and within an hour I was climbing the Sydney bridge, which was 1,397 steps! Beautiful, freezing, windy and completely awesome with the Vivid Sydney in full swing beneath! The following day, I toured “The Rocks” a lovely part of Sydney filled with interesting history – once upon a time, it’s where the criminals were kept and now the most expensive restaurants are now located there.

My next day was a day for me, I had a photo shoot for my new summer collection of custom jackets. The Sydney Harbor and the Sydney opera house was a beautiful backdrop! After I finished I went on to Manly – I fell in love with this sleepy little town and Shellie’s Beach was my favorite! I met the nicest people and they came over to Sydney my last day to join me for lunch! It was nice listening to locals take on their city. I learned a lot! I ran into “Crocodile Dundee” My last day of touring was at Featherdale wild animal park, I got to hold a koala, and it was the coolest petting zoo with wallaby’s, baby kangaroo and a menagerie of unique animals.

“To love is to burn, to be on fire.”Jane Austen
“True love stories never have endings.” Richard Bach
“Love is the expansion of two natures in such fashion that each include the other, each is enriched by the other.” Felix Adler